21st Century: Tricks are made for kids. 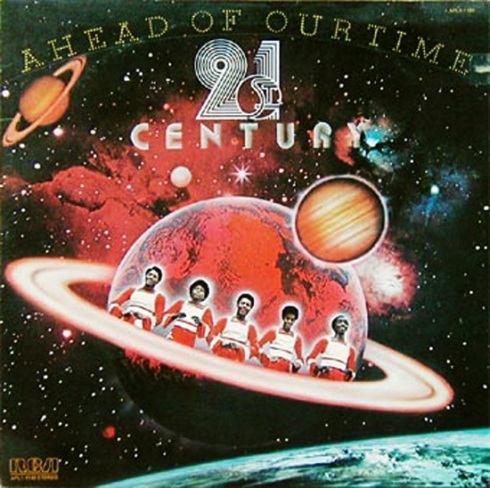 The 21st Century were yet another Kiddie Soul group out of the Chicago area (not unlike The Jackson 5, The Eight Minutes, Cindy & the Playmates, The Five Stairsteps, Pat & Pam, and The Brighter Side of Darkness). Many of these groups are detailed further here.

The group hailed from the West Side and were signed to RCA purportedly based on selling some 250,000 units of their 1975 single “Remember the Rain” in Chicago alone with no formal distribution. An album, titled “Ahead of our Time” followed, mostly produced by the mastermind behind that first single, Michael Smith.

Below, the classically moody “Remember the Rain”, which starts out with the prepubescent lead vocalist lamenting:

“We used to play out in the rain,

Your mother scolded us

She said that we were bad.

(she said that we were bad)

you watched till I was gone

Ooh Girl, you looked so sad.

I picked you up when you fell and cut your knee

I told you not to cry and held you close to me….

Interestingly enough, a 17 year old named David Leathers, Jr. auditioned for American Idol with the song. He went on to make it on to the show.

Another cut off the album is “Tricks are Made For Kids”, which has sort of a “Dancing Machine”-era Jackson 5 sound to it.

It’s as much a funky dance record as “Remember the Rain” is a Blue Light Slow Jam. Enjoy and Jive on.

i love the transportive powers of sound. i am a radio host/producer, DJ, Sound designer, 45rpm collector, and art lover living in the city of wind. END_OF_DOCUMENT_TOKEN_TO_BE_REPLACED
This entry was posted on Thursday, May 10th, 2012 at 2:00 pm and posted in the Freshness. You can follow any responses to this entry through the RSS 2.0 feed.
« Waxing Poetic at Dorchester Projects.
Crate Digger as Archaeologist…. »