Fame: Cult Movie of the Week 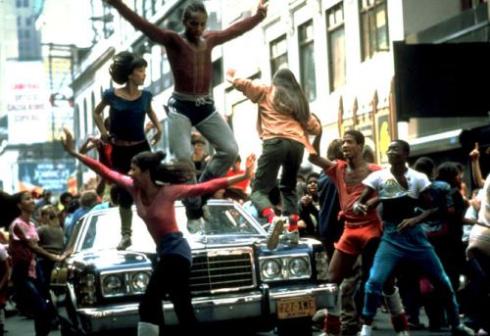 Fame (1980) is one of those movies that makes you wish you lived in a world so filled with youthful fervor that at anytime a group of kids might break into interpretive dance and jump on a cab.
We don’t.
But that didn’t keep us from cheering for the characters in the film (especially Coco and Leroy), and later the TV show (which featured Janet Jackson and Debbie Allen).
The story of  students at a New York Performing Arts High School, the film follows the ebb and flow of their kinetic reach for stardom. The narrative is, despite pitfalls, like an infusion of fresh hope in admittedly hard times.  It expresses a romantic image pairing sweat with success, art with desire.
A new Fame  motion picture is scheduled for release this year, but somehow it seems superfluous.  Those kids in the original are gonna live forever.
Wanna live forever? Wanna learn how to fly (again?)  the Tofu Chitlin Circuit is having a screening  of Fame in Bronzeville this Monday….
“If you want fame, well fame costs and right here is where you start paying with sweat!”

The Tofu Chitlin Circuit (a Bronzeville-based theater conservatory) is continuing their Family Reunion with the quintessential theater movie…”FAME!”  Enjoy a screening and discussion.

Prizes for the best FAME gear!

more about TCC:
“Our mission is to bring the audience into the creative process of theater.  Our conservatory is an educational platform that assists artists and audience members with intellectual dialogue, poignant interviews from theater practitioners, workshops, classes and of course performances!”

i love the transportive powers of sound. i am a radio host/producer, DJ, Sound designer, 45rpm collector, and art lover living in the city of wind. END_OF_DOCUMENT_TOKEN_TO_BE_REPLACED
This entry was posted on Sunday, July 26th, 2009 at 2:57 pm and tagged with cult movies, dance, Events, fame, Fame (1980), film, Irene Cara, Theater, Tofu Chitlin Circuit and posted in Arts & Culture, Cult Movie of the Week, Events, Film and Television, Musical Performance, Staged Affairs, Theater. You can follow any responses to this entry through the RSS 2.0 feed.
« Digital wolves in warm, fuzzy sheep’s clothing
Movies in The Park: Fireflies and Stars »

2 responses to “Fame: Cult Movie of the Week”