Operation Breadbasket, the seed of PUSH 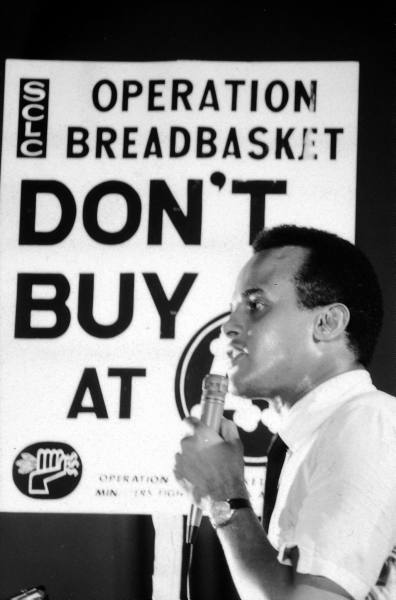 I have dedicated a number of posts here at Darkjive to the PUSH Expo, a 1970s exercise in Black Economic Empowerment (or Black Power as it was then known). The PUSH Expo phenomenon was borne from the seed of Operation Breadbasket (a department of Martin Luther King, Jr.’s Southern Christian Leadership Conference), but the roots took twisted turns.

The term “Civil Rights Movement” often brings to mind images of the deep south, but Chicago was a key battleground in those days. Not just because of the influx of new Black citizens that the Great Migration delivered, but because of the ongoing struggles for housing equality and empowerment exacerbated by said influx.

Jesse Jackson, whose ties to Dr. King traced back to the Campaign at Selma in 1965, was selected by King to head Operation Breadbasket’s Chicago Branch.  True to its name, the organization distributed nourishment to the communtity, but it also played a more proactive role to fighting for social justice.

Tactics such as boycotts were implemented, but according to Black Maverick: T.R.M. Howard’s Fight for Civil Rights and Economic Power by David T. Beito and Linda Royster Beito (Urbana: University of Illinois Press, 2009), a seamier aspect including cronyism and strong-arming businesses to donate money to Operation Breadbasket were folded into the tactics, as well.

Eventually, leadership rifts came to a head, and in December 1971, Jackson fell out with Ralph Abernathy, King’s successor as head of the national SCLC. Jackson and his allies broke off and formed Operation PUSH (People United to Save Humanity).

Various sources tell me that this was a pivotal moment in Chicago History because a giant, organized black party (the largest in Chicago at the time) broke off into factions and never regained the traction it had built before that point.  Then crack hit the community like the atomic bomb (and the fallout is still being felt).  I argue that the hindsighted strength of the PUSH Expo-era was built on momentum created in the years that had preceded it, in conjunction with the genius of marketing with a major motion picture (!) and tons of press.   Documentation equals existence itself, and media has the power to romanticize just about anything.

In the end, please leave me the romance.  Let me believe that we were SO close to breaking free.  It gives me a fairy tale to build tomorrow upon.

8 responses to “Operation Breadbasket, the seed of PUSH”