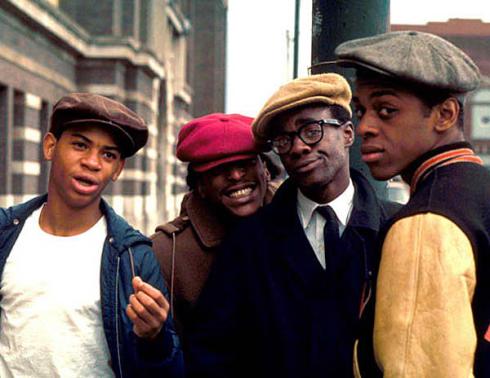 Today, it’s a question of whether your pants are sagging or not (as far as I’m concerned).

In the Sixties, on the South and West Sides of Chicago, the male clothing signifier was whether you were a Gouster or an Ivy Leaguer.

A former co-worker who I guess would be classified as a Gouster now, but was an Ivy Leaguer then, told me:

Basically, Gousters dressed like old school gangsters (by this he meant O.O.G., like Thirties-Forties-Fifties era), and Ivy Leaguers dressed preppy.  Gousters were considered to be kinda like hoods, whereas Ivy Leaguers at least looked like they kept their noses clean (for a pretty accurate visual, watch Cooley High. Preach [Glynn Turman’s character] would have been considered an Ivy Leaguer. Many of the other cats were classic Gousters).

This conversation started when I un-covered a record from about 1964 called “The Gouster” by a local group called the Five-Du Tones.

I found a really nice blog post from Wild-Child where she waxes poetic about the styles:

“I recently encountered an old friend who lived in the neighborhood back in the day. He lived on 35th Street and I lived on 31st. We were from the same neighborhood and attended the same high school. He was the coolest guy in history. Not only was he fine, he could DANCE. His fashion identity was Gouster style. I can still smell the Jade East.

Time had done him wrong and it started me wondering what time had done to me. I thought back on those days when we were young and would go anywhere to attend a dance. If a guy could Bop, he was king of the night.

Whether he was your lover, your good friend, or kind of like a play brother, back in those days, boys had one of two popular fashion styles, Gouster or Ivy League. An Ivy Leaguer was a collegiate wannabe, a 60’s version of J. Crew with just a touch of swagger. His style was straight-legged pants, sometimes with a belt buckle in back; a buttoned-down collar shirt; and tinted glasses.

Ivy Leaguers shopped at Brooks Brothers where they specialized in starched, buttoned-down shirts with French cuffs and cufflinks. The Ivy Leaguer would complete the look with a V-Neck, wool blend sweater thrown over the shirt to give us girls a thrill.

A Gouster’s style was dress-casual. He wore lose fitting, almost baggy clothes. His fine wool, alpaca and mohair sweater had three buttons at the neck, with a lazy, turned down collar. Pants with two pleats at the waist left a little room in the leg so that a Gouster could pimp. He usually pimped on down to Smokey Joe’s Fashion House to buy more fabulous outfits. As I said earlier, Gousters favored Jade East, while Ivy Leaguers spruced up with Aramis.

Girls were just beginning to wear pants, and many of us still wore mini-skirts and dresses to dances in order to show off our legs. Girls shopped at Brooks Brothers to show their allegiance to an Ivy Leaguer if that was who they were dating at the time. Sometimes we’d wear the sherbet colored, buttoned-down shirts, with plaid, pleated mini-skirts, matching knee socks, and suede, lace-up shoes called “Bucks”.

If we were dating a Gouster we’d wear cardigan sweaters that buttoned down the back and tight skirts, with pearl earrings and pearl necklaces. We’d finish that look with nylon stockings and Cha-cha boots.

Today, I couldn’t tell if my friend was Ivy League or Gouster. He just looked comfortable. But every once in a while, I see a brother my age with a certain ‘je ne sais quoi’ and I know right away which one he is.”

For even more on the term “Gouster”, including some pretty intense etymology, click here to visit Language Hat’s fascinating blog. Jive on!

UPDATE: Back in the 1970s, David Bowie recorded an album called “The Gouster” that was inspired by Gouster culture in Chicago. The album remained shelved until 2016, though a number of cuts were released on his classic “Young Americans” LP. Here’s an interesting write up on “The Gouster” album from Vice iD.

Also, do yourself a favor and check out the super-informative comments section below…

i love the transportive powers of sound. i am a radio host/producer, DJ, Sound designer, 45rpm collector, and art lover living in the city of wind. END_OF_DOCUMENT_TOKEN_TO_BE_REPLACED
This entry was posted on Tuesday, February 1st, 2011 at 1:30 pm and tagged with Brooks Brothers, Chicago Soul, Chicago Style, Clothing, David Bowie, fashion, Gouster, Gouster Bop, Ivy Leaguer, South Side Chicago, style, the gouster and posted in Chicago Cultural History, Local Chicago Music, style. You can follow any responses to this entry through the RSS 2.0 feed.
« Just Because I Really Love You: evolution of a groove.
John H. White: Five Minutes of Light »

10 responses to “Gouster or Ivy Leaguer?”