So, this week or so, here’s where you can catch DJ Ayana in action: 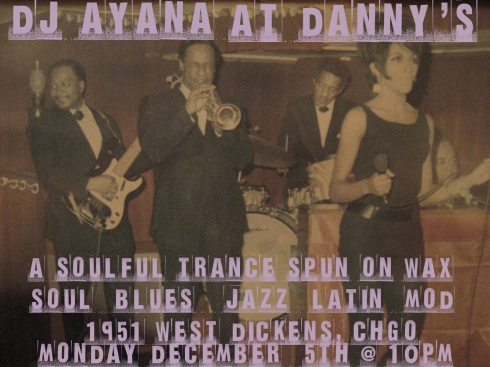 Folks in the know love this spot for its nice sound system and dancing scene. I plan to spin an exciting mix of mod, latin, blues, and soul to swoon and move to. Of course, heavy on the local sounds, heavy on the heavy sounds.

More about The Listening Room: [from the art newspaper]

The installation will feature a collection of vinyl albums from the now closed Dr Wax record store in Chicago to create a space in which visitors can gather to listen and learn about “a cultural archive that was getting lost”, says Gates.

Around 4,000 records, including recordings of Martin Luther King, Jr, James Brown, the Isaac Brothers and vaudeville comedienne “Moms” Mabley, will be embedded in the gallery wall.

Gates says the records can be used to examine African-American politics through history: “When were our voices radical, when were they pacifist? Do we sing about things we can’t scream about?” A DJ [me] will play selections in a pulpit-like station built by Gates from reclaimed materials. “The DJ is the minister of music, the albums are the choir…”

i love the transportive powers of sound. i am a radio host/producer, DJ, Sound designer, 45rpm collector, and art lover living in the city of wind. END_OF_DOCUMENT_TOKEN_TO_BE_REPLACED
This entry was posted on Saturday, December 3rd, 2011 at 4:30 pm and posted in Uncategorized. You can follow any responses to this entry through the RSS 2.0 feed.
« Chicago: in all its fried, dyed, laid-to-the-side (or perhaps natural) glory.
Record Store: where you can’t buy anything, but you can listen to everything. »