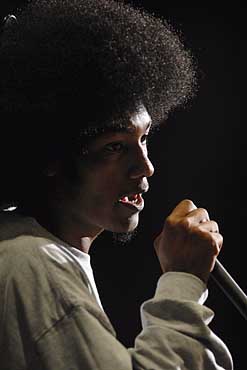 •Carolyn Rodgers (see poem below) emerged from the Black Arts Movement in Chicago in the 1960s as a “revolutionary poet,” creating a distinct and profound black aesthetic.

•John Murillo is an Afro-Chicano poet and playwright, a graduate of New York University’s MFA program, and a recent fellow at the Fine Arts Work Center in Provincetown, Massachusetts.

•Aja Monet is a Cuban-Jamaican poet originally from Brooklyn, now residing in Chicago. At 22 years old, she is currently the youngest Grand Slam Champion of the Lower East side’s legendary Nuyorican Poet’s Café.

Each poet will perform their work and then participate in a post-performance conversation, followed by an Open Mic Showcase. This event is taking place as part of Chicago Public Radio Presents… The 2nd Annual Winter Block Party for Chicago’s Hip-Hop Arts.

“The Block Party is a tribute to the working artist of the hip-hop generation in Chicago and an opportunity for the city, traditionally segregated, to see each other across neighborhood and viaduct.” – Winter Block Party Artistic Director Kevin Coval.

Having tried to use the
witch cord
that erases the stretch of
thirty-three blocks
and tuning in the voice which
woodenly stated that the
talk box was “disconnected”
My mother, religiously girdled in
her god, slipped on some love, and
laid on my bell like a truck,
blew through my door warm wind from the south
concern making her gruff and tight-lipped
and scared
that her “baby” was starving.
she, having learned, that disconnection results from
non-payment of bill (s).
She did not
recognize the poster of the
grand le-roi (al) cat on the wall
had never even seen the books of
Black poems that I have written
thinks that I am under the influence of
“communists”
when I talk about Black as anything
other than something ugly to kill it befo it grows
in any impression she would not be
considered “relevant” or “Black”
but
there she was, standing in my room
not loudly condemning that day and
not remembering that I grew hearing her
curse the factory where she “cut uh slave”
and the cheap j-boss wouldn’t allow a union,
not remembering that I heard the tears when
they told her a high school diploma was not enough,
and here now, not able to understand, what she had
been forced to deny, still–
she pushed into my kitchen so
she could open my refrigerator to see
what I had to eat, and pressed fifty
bills in my hand saying “pay the talk bill and buy
some food; you got folks who care about you . . .”
My mother, religious-negro, proud of
having waded through a storm, is very obviously,
a sturdy Black bridge that I
crossed over, on.