AREA/Chicago Release Party… inside and outside Chicago 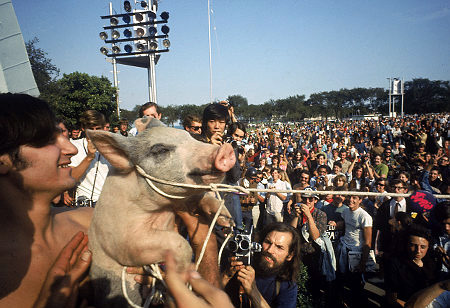 (above, Pigasus [the pig candidate for President from the Yippie party] at a rally, Chicago 1968.  classic Windy City protest)

AREA #9 Release Party marks the release of AREA #9 Peripheral Vision: A Local Reader Inside and Outside Chicago…November 1, 2009 from 2:00pm till 5:00 pm.

So there will be lots of great things to see alongside two events which are scheduled:

3:00 Peripheral Feminism: Readings by contributors
and 4:00 Performance by Sebastian Alvarez

This issue’s contributions are by/about:

(below, the South Side Community Art Center. The Art Center, which was established as part of the Works Progress Administration’s [WPA] Federal Art Project, has been influential in the development of the city’s African-American artists. It is the only continuous survivor of the more than 100 centers established nationwide by the WPA during the 1930s and ’40s.)