I’m in love, and his name is TESLA

I love my car.  I do.  But the above COMPLETELY ELECTRIC car, the Tesla Model S is making me fantasize about a polygamous vehicle relationship. To be clear, when I say electric, I am not referring to those butterflies I feel.  I refer to Tesla Motors’ status as the only highway-legal electric car company based in the U.S. (California, to be exact).  The Model S will hit 0-60mph in 5.6 seconds, allow up to 300 miles per charge without a single oil change, not a drop of gas, and the estimated cost in electricity per charge is $4 (from any outlet).  Swoon.

Tesla Motors’ previous offering, the Roadster, was easy to dismiss as something for the rich (Sticker price starts at around $100,000).  This baby, however, starts at $49,000.  It will be the company’s first foray into mass-produced vehicles.  Mass production, of course, drastically reduces the price versus a handmade custom creation model (think couture fashion versus The Gap).   The Model S is expected to come out in 2012.  In the meantime, a dealership selling the Roadster will open here in Chicago (on Grand Avenue) this spring.  Swoon.

To date, Tesla is lobbying the government for the same stimulus money now going to the banks and other (much larger) American Automakers.  I’m watching closely, because this is just the sort of thing that renews my faith in American Ingenuity… 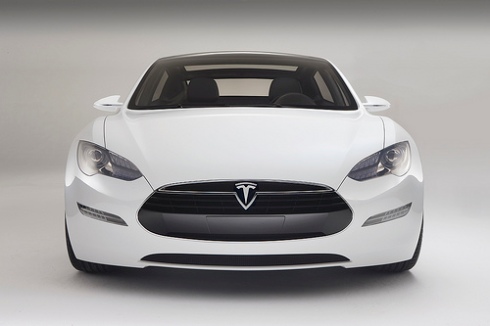 i love the transportive powers of sound. i am a radio host/producer, DJ, Sound designer, 45rpm collector, and art lover living in the city of wind. END_OF_DOCUMENT_TOKEN_TO_BE_REPLACED
This entry was posted on Monday, May 11th, 2009 at 3:51 pm and tagged with Cars, Economy, Electric Cars, Technology, Tesla, Tesla Model S, Tesla Motors and posted in Commentary, the Freshness. You can follow any responses to this entry through the RSS 2.0 feed.
« Cult Movie of the Week: Sparkle
Apparently, Nightlife in Chicago is Getting Eclectic. »

One response to “I’m in love, and his name is TESLA”