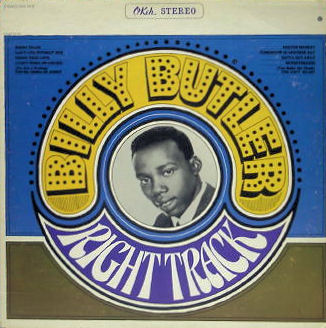 From Jerry Butler’s little brother, Billy, it’s “I’ll Bet You”.  Jerry Butler, of course, was a member of the Impressions (as well as one of the most successful solo acts in Chicago Soul history).  Billy never quite made it out from the shadow of his superstar brother, but he made a few valiant efforts: among them, “Right Track”, and this George Clinton and Sidney Barnes-penned mover, later recorded by Funkadelic.

Billy started his career at Chicago’s Okeh Records with a group called the Enchanters (later the Chanters).  He was a talented songwriter and guitarist who credited both his brother, Jerry, and Curtis Mayfield for sparking his interest in music.  The artists used to rehearse in the Butler living room.

Later in his career, he recorded with a group called Infinity, but ultimately ended his career solo on Curtis Mayfield’s Curtom Records with the rare 70s groover “Sugar Candy Lady”.