See Potential: helping us all envision the rebirth of abandoned buildings on the South Side. 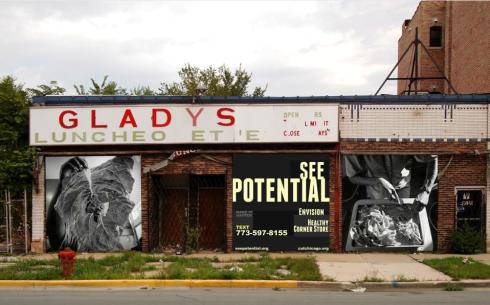 See Potential in what’s around us. That’s the goal of photographer Emily Schiffer’s See Potential initiative: affixing huge weatherproof photographic works to undervalued community assets. It’s a great idea that can help harness the public imagination for the greater good. It’s the sort of greater good that Schiffer always hoped her art would serve. She related to Benevolent Media:

“It’s very clear that publishing an image in a magazine or having a gallery show or having a book isn’t actually going to change anything… I’m always jealous of people who do pottery, for example, because their art has some sort of practical use.

For instance, Gladys’ Luncheonette (a Soul Restaurant that served Chicago’s Bronzeville neighborhood for decades, but recently closed) is re-imagined through imagery as a healthy corner store offering cooking classes. For members of the neighborhood, this is definitely a soft sell; but Schiffer, alongside Orrin Williams and Judith Helfand, is also trying to sell the viability of community development to outside investors (as well as the City of Chicago itself).

The works will illustrate the Center for Urban Transformation’s revitalization plans for shared community spaces such as:

– Cooking schools or community centers refashioned from blighted homes that will provide holistic living practices through diverse forms of community outreach and education.

According to their Kickstarter proposal:

“Each photographic installation will include a text panel encouraging onlookers to send a text message in support of that specific site transformation.  Using a custom-designed SMS text messaging infrastructure and GPS technology, [they] will collect all messages and record the location from which each text was sent.  By pinpointing the different locations and by tracking the amount of public support at each site, we will be able to present a series of interactive, web-based maps to potential funders, policy makers, and city officials.”

This is just the sort of paradigm shift that Darkjive is all about, something I term as Lack versus Fat (outlined fully here). Using the analogy of the coffee can full of grease that my grandmother kept on her stovetop, the grease (and the can itself) could, at first, be considered waste material. But upon reevaluation, it can also be considered a resource that can contribute to the kind of meal that sustains life. The same can be said for abandoned buildings, or so many things in our communities that can be seen as deficits. 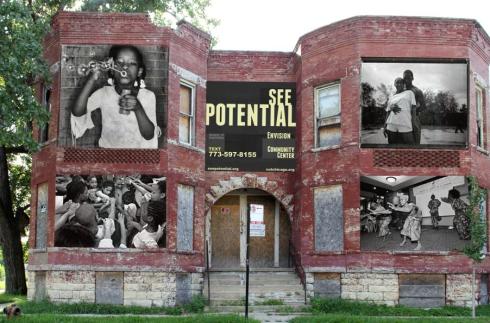 for more on the project (which was recently successfully funded via Kickstarter) click here.

i love the transportive powers of sound. i am a radio host/producer, DJ, Sound designer, 45rpm collector, and art lover living in the city of wind. END_OF_DOCUMENT_TOKEN_TO_BE_REPLACED
This entry was posted on Wednesday, February 1st, 2012 at 8:52 am and tagged with Center for Urban Transformation, Chicago, community activism, community building, emily schiffer, gladys' luncheonette chicago, Kickstarter, lack versus fat, Orrin Williams, photography, see potential, urban planning and posted in Arts & Culture, Commentary, Lack Versus Fat, Photography. You can follow any responses to this entry through the RSS 2.0 feed.
« Darkjive’s February Dance Card
Don Cornelius: made Soul a household name. »

2 responses to “See Potential: helping us all envision the rebirth of abandoned buildings on the South Side.”