Michael Abramson: Pulse of the Night. 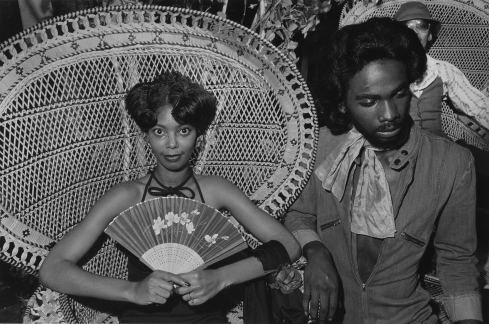 all photos by Michael L. Abramson

What goes on at small clubs is ephemeral by nature: society created and dismantled night after night. A delicate hierarchy composed of drifters, dreamers, and those simply longing to escape. In the mid 1970s, a young white student, Michael Abramson, worked his way into the world of largely black South Side Chicago clubs. He brought his camera along for the ride, capturing images that otherwise would’ve vanished like smoke from a languishing cigarette.

The photos were taken at famous spots, such as Perv’s House (owned by Pervis Staples of the Staple Singers fame), the Patio Lounge, and Pepper’s Hideout. These clubs hosted live music that was a heady mix of blues, funk, and soul by artists like Bobby Rush, Hi-Fi White, Little Mac Simmons, and much more. The current South Side Chicago club scene (in terms of live, homegrown entertainment) is a shell of its former self. That fact makes these photos that much more valuable.

Currently, dozens of Abramson’s photos from this period are on display through Columbia College’s Museum of Contemporary Photography. According to the Museum, “this work earned Abramson a grant from the National Endowment for the Arts in 1978 and launched his successful career as a portraiture photographer and photojournalist. Abramson’s photographs can be found in the permanent collections of the Smithsonian, the Art Institute of Chicago, the Chicago History Museum, the Milwaukee Art Museum, Madison Museum of Contemporary Art, and the California Museum of Photography.”

These photos of grit and gold lamé, born amidst midnight debauchery, are displayed between reference materials at the Columbia College Library. The juxtaposition is not lost on me. Despite their stoic surroundings, they simply hum with electricity.

The Michael L. Abramson: Pulse of the Night exhibition is located on the second floor of the Columbia College Chicago Library, 624 S. Michigan Avenue. It is on display until December 19th, 2014.

See Potential: helping us all envision the rebirth of abandoned buildings on the South Side.

See Potential in what’s around us. That’s the goal of photographer Emily Schiffer’s See Potential initiative: affixing huge weatherproof photographic works to undervalued community assets. It’s a great idea that can help harness the public imagination for the greater good. It’s the sort of greater good that Schiffer always hoped her art would serve. She related to Benevolent Media:

“It’s very clear that publishing an image in a magazine or having a gallery show or having a book isn’t actually going to change anything… I’m always jealous of people who do pottery, for example, because their art has some sort of practical use.

For instance, Gladys’ Luncheonette (a Soul Restaurant that served Chicago’s Bronzeville neighborhood for decades, but recently closed) is re-imagined through imagery as a healthy corner store offering cooking classes. For members of the neighborhood, this is definitely a soft sell; but Schiffer, alongside Orrin Williams and Judith Helfand, is also trying to sell the viability of community development to outside investors (as well as the City of Chicago itself).

The works will illustrate the Center for Urban Transformation’s revitalization plans for shared community spaces such as:

– Cooking schools or community centers refashioned from blighted homes that will provide holistic living practices through diverse forms of community outreach and education.

According to their Kickstarter proposal:

“Each photographic installation will include a text panel encouraging onlookers to send a text message in support of that specific site transformation.  Using a custom-designed SMS text messaging infrastructure and GPS technology, [they] will collect all messages and record the location from which each text was sent.  By pinpointing the different locations and by tracking the amount of public support at each site, we will be able to present a series of interactive, web-based maps to potential funders, policy makers, and city officials.”

This is just the sort of paradigm shift that Darkjive is all about, something I term as Lack versus Fat (outlined fully here). Using the analogy of the coffee can full of grease that my grandmother kept on her stovetop, the grease (and the can itself) could, at first, be considered waste material. But upon reevaluation, it can also be considered a resource that can contribute to the kind of meal that sustains life. The same can be said for abandoned buildings, or so many things in our communities that can be seen as deficits.

for more on the project (which was recently successfully funded via Kickstarter) click here.

Wilbur Holmes: images of the West Side with Grit and Grace

Carlos of Surplus of Options (a smokin’ hot Antique/Resale shop full of curiosities here in Chicago) found these pictures… in fact, he picked up dozens of them… at a West Side Junk shop for almost nothing. I was immediately struck by the photos, both for their composition and tone. I bought the pictures from him with the promise that I’d share them with Darkjive readers.

All of the photos came from the same lot and are presumed to have been taken by one Wilbur Holmes (who apparently had a way with the ladies, based on the subject matter of many of his shots). A good number of his photos had West Side subject matter, such as the Garfield Conservatory and Malcolm X College. At first, the photographer was a mystery. Only one shot (not pictured here) had his name embossed in the corner.

A bit of research turned up that Mr. Holmes worked for the post office for 40 years (as well as being a self-employed photographer). 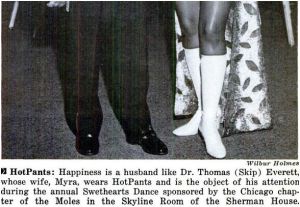 He was a First Lieutenant in the Army in World War II, and he died in 1991. If you know/knew Mr. Holmes and have more info, please share it here in the comments section. I’m so grateful that Darkjivers are so good at sharing…

Chicago-based photographer John H. White (whose work has been highlighted here many times) was awarded the Pulitzer for general excellence in photography in 1982. This general excellence award is no longer awarded. This is the story of the photo (above) that won him his award.

Mr. White was assigned to go to a local dance school to take some pictures on a cloudy day. He didn’t want to use unnatural light (such as a flash) for his photos, so White prayed to God that he would have an afternoon of light. He didn’t get it. Next, he prayed for 15 minutes of light. Still nothing.

“How about 5 minutes of light, God?” he asked. And then, suddenly, a ray of light that came piercing through one of the studio’s windows and he took his pictures.

“I asked for five minutes of light and He gave me a Pulitzer Prize.”

In celebration, it’s Chicago’s Staple Singers with “Uncloudy Day” from 1959.  Released on local Vee Jay Records, it features haunting echoey guitar licks, other-worldly harmonies, and beautifully sparse acoustic production.  The song also forged a brand of socially-conscious gospel that The Staples would eventually be known the world over for.

Nolan Chance and the Beach: i’ll never forget you.

I love “I’ll Never Forget You” by Nolan Chance.  Released here in Chicago in 1969, its creation was a collaboration between Curtis Mayfield, Donny Hathaway, and Leroy Hutson (arguably the patron saints of Chicago Soul for the decade that was to come).  The song has aural dream sequences: One moment, Nolan is reminiscing the sand-in-shoes good times spent with his lost love.  The music is floaty, featuring dreamy keys and a güiro, the same scraping percussion instrument in the Drifters’ “Under the Boardwalk”.

The next moment, Nolan is snapped back into reality and the music features rhythmic, ebbing horns that recede like the tide.  It makes me want to go to the beach.  Enjoy the pictures and the music…. 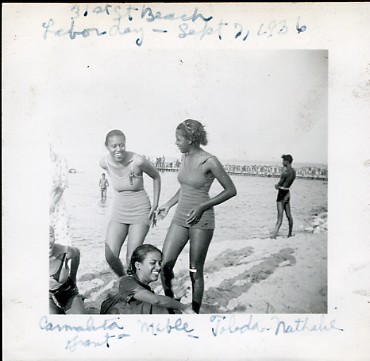 NOTE: Nolan Chance (born Charles David) was raised in LaGrange, IL, and was at one time a member of the Artistics.  Another record of his that I picked up based on my love for “I’ll Never Forget You” is “I’d Like to Make it With You”, the B-side of “Sara Lee” (released in 1972, and NOT the same song as the similarly titled “Make it With You” by Bread).  Great sassy Chicago brass and pulsating rhythm.  Jive on.

Let’s Clean up the Ghetto. 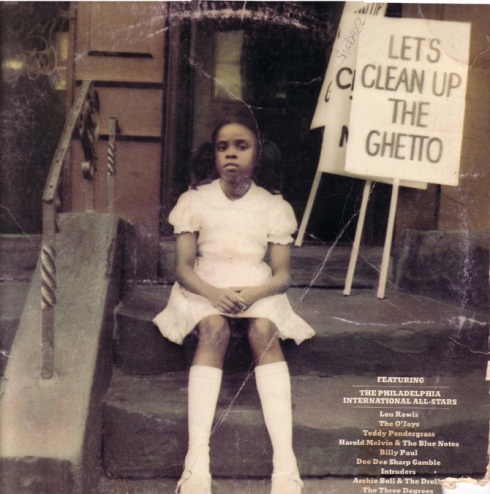 Light: On the South Side…Grit and Gold Lamé

I, for one, have stared for more than a moment at the forgotten, peeled paint on the side of the 408 Club building over on 79th Street (just East of King Drive).  In mid-seventies hipster font, the ad reads “Sheba Disco”, apparently some sort of disco club.  I’ve wondered what manner of elephant bells and Quiana was to be found there in its heyday.

In the mid-’70s, photographer Michael Abramson set his viewfinder on the South Side of Chicago, specifically the many clubs and lounges that served as Hothouses of street fashion (among them, the legendary High Chaparral and the Showcase Lounge). They reflected where blues, soul and disco collided:  a dream of grit and gold lamé.

Those photos have been compiled in Light: On the South Side, which is set for a November release by local label Numero Group.  The package also includes a 17-track vinyl-only comp entitled Pepper’s Jukebox, featuring various local juke joint luminaries including Bobby Rush and Little Mack. Cratediggers, this one also includes the one-time cockroach of Chicago 45rpm collecting: “I’m a Streaker, Baby” by Arlean Brown.  Remember that one?  Couldn’t even give that one away, it was so plentiful.  Anyway, check out the photo gallery, above (from the forthcoming book).  Be inspired.  Jive on. 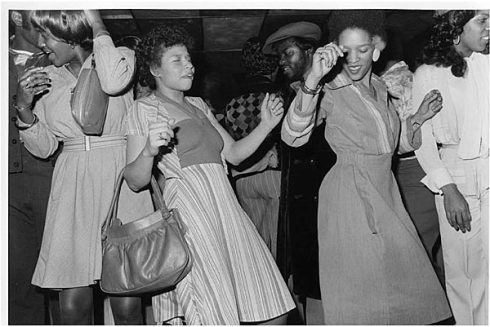 Portraits of Black Chicago: The Beat Goes On

Black bongo player performs at the International Amphitheater in Chicago as part of the annual PUSH [People United to Save Humanity] ‘Black Expo’ in the fall of 1973. October 1973

Chicago’s PUSH Black Expo was a powerful tour de force for Black Businesses nationwide at the time this photo was shot.  Time magazine stated in a 1971 article: “When the five-day trade fair opened in Chicago last week, there were representatives of nearly 400 black firms on hand to prove the premise. But before the week was out, Black Expo proved to be more than a display of the products of America’s fledgling black capitalism. It turned out to be an unofficial convention of entrepreneurs and politicians in search of power at the polls as well as in the marketplace.“ Wow.   There was even a major motion picture shot to document one year’s occurrence, entitled “Save the Children” (after that year’s theme).  So what happened?

Almost exactly twenty years after the above photo was shot, the following was published in the Chicago Reporter:

By: Ray Quintanilla (originally published in the Chicago Reporter in September 1993)

When about 250,000 people, most of them African Americans, turned out for this year’s Chicago Black Expo, many were offered fried chicken and menthol cigarettes…

END_OF_DOCUMENT_TOKEN_TO_BE_REPLACED

I found these photos on a blog called desinuts.com.  Very cool site focusing on pop culture and graphic design with a lot of Indian culture peppered in, as well.  I think these colors are so dope.
NOTE: the pictures are of a Hindu celebration called Holi, the Festival of Colors. Holi is celebrated as a welcoming of Spring, and a celebration of the triumph of good over evil. What that translates to in action is an enthusiastic dropping of inhibitions, as people chase each other and playfully splash colorful paint, powder, and water on each other.