I’m a sucker for colored wax; but this is more than just a pretty face. 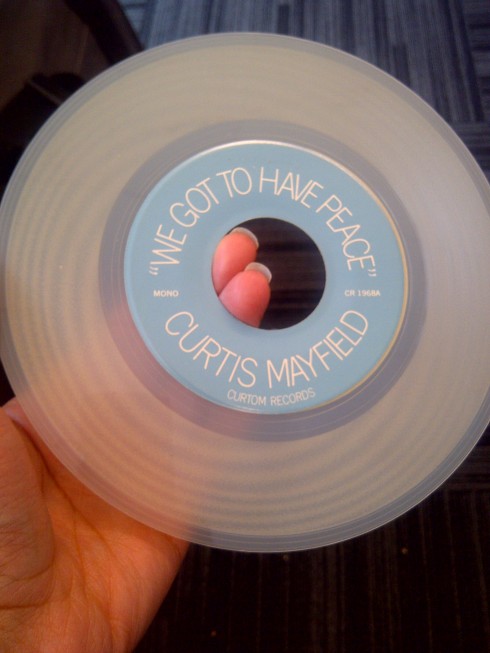 I just found this lovely promo record. As you can see, it’s Curtis Mayfield’s “We Got to Have Peace”. It’s from the album Roots that he released back in 1971. The album was released months before Superfly, and it is just as wonderful.

Released on Curtom Records (Curtis’ own label), this promo is pretty rare. Colored vinyl (especially on 45) from this period is quite rare, in fact. Rarer still is a vanity label (unique to the release). Generally speaking, colored vinyl promos were created to make people (DJs particularly) stop and take notice.

And notice I did, 40 some years later.

In the year following the epic 1970 album Curtis, Mayfield was mounting a campaign to fully express himself as a solo artist in ways he couldn’t as a member of the arguably more conservative Impressions.

In his initial solo outings, the songs were markedly longer, basslines were funkier, African percussion became prominent, and horns a bit jauntier. But Mayfield’s commitment to exploring the full spectrum of black experience (something very evident in Impressions records) never wavered. Curtis was particularly keen at expressing voices of Urban Black Men: those who struggled, scratched, loved, dreamed, and believed. His expressions are still relevant today, wrought with eloquent and earthy simplicity. As far as I’m concerned, “Move on Up” is a Black National Anthem.