a Chicago Be-In at Promontory Point, 1967 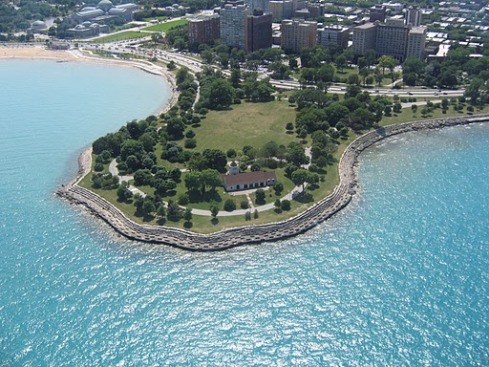 What’s a Be-In? Check the video below from the Lincoln Park Be-In for more background on the celebration of  “Turning on and Tuning In”.

Around the time of Chicago’s storied Blizzard of 1967 which dumped 23 inches of snow over the course of about 35 hours, out in San Francisco, the first “Human Be-in” or “Be-In” occurred in Golden Gate Park.

On Mother’s Day of that year (once we had all thawed out), a Be-In occurred here in Chicago in Lincoln Park, followed by one on the South Side at Promontory Point (pictured at top of post). The Be-in at Lincoln Park was fairly well covered by media of the day, but its South Side cousin has left barely a trace of proof behind. To me the whole sunshine and daisies Hippie Counterculture narrative is striking set against the backdrop of Chicago, where just a year earlier Martin Luther King, Jr. marched for open housing. He later stated:

“…the People of Mississippi ought to come to Chicago to learn how to hate.”

The Human Be-In took place in San Francisco, with a whole bunch of lost children and intellectuals. They didn’t have the crush of history weighing heavy on them. Chicago’s Be-Ins had a bit more subtext: the ongoing racial tension that exploded the  following year, Class-based struggles that often manifested themselves in Union tussles, and the ever widening so-called Generation Gap. Maybe people were yearning to come together. 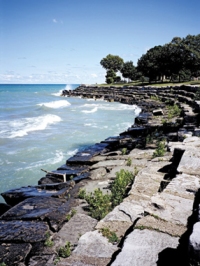 ‘The Point’, as it is known, was a natural choice for such a ‘Be-In’. It has served as a point of convergence for people of all stripes since its opening in 1937, particularly weddings.

A man-made peninsula, ‘The Point’ has been embroiled in controversy due to the City’s recent plans to remove the limestone embankment (see left), replacing it with steel and concrete. Much of the Lakefront had initially had the limestone treatment, but was torn out in the 1990s. A “Save the Point” preservationist movement ensued.

Below, the only photo I could find of the 1967 Promontory Point Be-In, published in the July 1967 issue of Ebony Magazine. 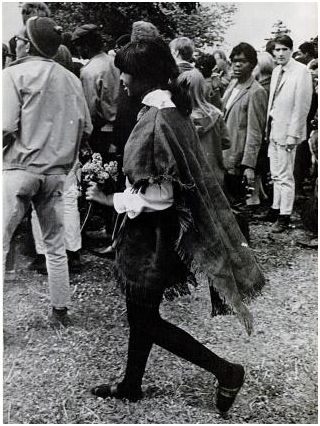 In the uncredited Photo-Editorial that accompanied the picture, the author suggests:

“But let’s forget it. The dream is over. The Be-ins won’t make even a dent in the hate and mistrust and dissension in this country alone. There will still be screams of black and white power, the double-talk of politicians, the fight over open-occupancy, poverty amidst plenty, crime, graft and double dealing… But on second thought, if you do hear that there is going to be a Be-in in your city, go on out to it. Be a human being for at least one afternoon. Some of it might stick.”

La Cade: The little hair care company that made some big waves.

La Cade Products was another of many Chicago-based black hair care firms (that I detail here) during the late 60s through the 1970s. Though not as well-known as Supreme Products (who created Duke and Raveen) or Johnson Products (who created Soft Sheen, Afro Sheen, and Ultra Sheen), La Cade left behind scant but fascinating evidence of its existence.

First off, it left some pretty great advertisements starting around 1972 (my favorite is above, from a 1974 issue of Ebony Magazine). How’s that for swagger? There’s a sort of street romantic and cinematic appeal to the image used. They also came up with some clever product names: one of which got them in legal trouble… but we’ll dig into that later in this post.

Most notably, to me (and probably, many Darkjive readers, as well) is that sometime around 1974 La Cade decided to put together a small recording division, based at their Corporate Headquarters (2411 South Michigan in Chicago). They recorded no less than two

artists on two singles: both of which are as gritty and charismatic as the ad above.

The first is “Beginning of the Void” backed by “Love Me Too” by Danny Hunt (who sounds to me very much like a young Stevie Wonder on his records). I actually love this record. Very soulful, with a stone cold groove, the lyrics are remarkably socially aware and include:

He’s in the beginning of his void

The following year, Hunt released a beast of a cut arranged by the iconic Tom Tom Washington and released on Dynamite Records (another tiny Chicago-based imprint). Last time I checked, Danny Hunt was alive and well in the Chicago-area singing Gospel music.

The other record I have found is by Walter “Butterball” Davis, titled “Baby (Wacha Doin to me)” backed by “Girl Stop Begging”. He had also put out a record called “Nobody Cares for a Junkie” on Butterball Records… it’s deep. Really deep. But, Back to “Girl Stop Begging”: the cut is a bluesy-funky little gem penned by Davis himself.

Both records suffered from lack of promotion and distribution and stalled out. It was about this time that La Cade trademarked a product name that I think is very seventies and cool: “The Last Tangle”, presumably inspired by the controversial 1972 film “Last Tango in Paris”. In the film (which was Rated X at the time), Marlon Brando’s middle-aged character has a torrid affair with a soon to be married young Parisian woman with scandalous results. Oh yes, these folks had some swagger.

MR. SULLIVAN: I would like to renew my running objection that the only question involved here is the applicant’s right to use the descriptive term “ultra.”
We do not object to its use of the term “Mink,” which has been disclaimed by applicant. Neither have we objected to the use of others using the term “Mink,” but we are objecting to the use of the descriptive term “ultra” which we had adopted and used as part of the “ultra White Minx” trademark but using “ultra” merely in its descriptive connotation, and that is the whole substance of this opposition.
—ROUX LABORATORIES, INC. v. LA CADE PRODUCTS CO. 558 F.2d 33 (1977)

Ultimately, Roux Laboratories’ counsel dropped the complaint, but not without costing La Cade a lot of money in legal fees. By 1977, the firm had stopped advertising in Ebony Magazine, had stopped releasing records, and the trail goes otherwise cold. But, in a few short years, La Cade surely left behind some waves: both soundwaves and hair waves. Jive on!