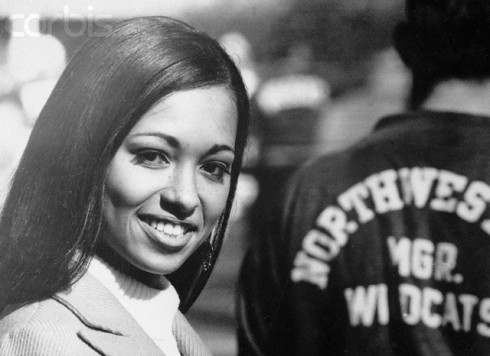 Here’s the original caption that accompanied the above shot:

You heard that right: the second Aunt Viv from the Fresh Prince of Bel-Air… the one you said you didn’t like as much as the first one… she was the FIRST black homecoming queen at Northwestern.  Wow.   Much respect for that one.  She was also a well known model in the late sixties who was featured in a 1969 Life Magazine issue that heralded “Black Models Take Center Stage” as the cover story. She also starred in Frank’s Place: an 80s TV series that was (and is) highly revered in the black community.

According to the Museum of Broadcast Communications, “Frank’s Place…. deserves a continuing place in programming history. It did, as Tim Reid [Daphne’s husband and co-star] told New York Times reporter Perry Garfinkel, present blacks not as stereotypes but as “a diverse group of hard-working people.”

NOTE: According to a fairly recent article in the Times-Picayune (out of New Orleans):

‘Frank’s Place’ DVD on the way

A DVD release of “Frank’s Place,” the New Orleans-set sitcom that aired on CBS in 1987 and 1988, is apparently growing closer.

No timetable is set, but star and co-creator Tim Reid said he has convinced CBS to allow him to release the show’s 22 episodes on DVD. However, purchasing rights to the music used in the series is still prohibitively costly.