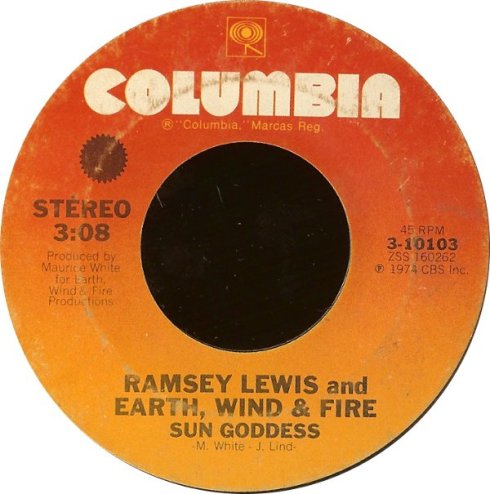 In 1974, Earth, Wind, & Fire was beginning its ascent to “Shining Star”-dom: “That’s The Way of the World” had not yet been released, but “Head to the Sky” and “Devotion” had already made them radio favorites. Maurice White, the lead vocalist on so many of EWF’s cuts (and a beastly drummer) returns the favor paid to him by Chicago legend Ramsey Lewis (who selected him for the second generation of the Ramsey Lewis Trio).

The first generation of the Ramsey Lewis Trio featured Lewis with Eldee Young and Redd Holt (of Young-Holt Unlimited best known for “Soulful Strut”), who struck out on their own in about 1967, while the second featured Lewis, White, and Cleveland Eaton.  The second generation sounded decidedly funkier.

Ultimately, Maurice White, too, struck out to form the Salty Pepers (sic), which, with members of the Pharaohs, formed what became Earth, Wind & Fire.

Summer has left our once-warm grasp.  In memorium, Darkjive presents Chess Records’ Billy Stewart with a 1966 version of the classic song “Summertime” (from Porgy and Bess).  I love how Billy Stewart’s scats interplay with insistent horns and halting guitar licks.  The drummer on the cut is a very young Maurice White (of Earth, Wind, and Fire).

Originally from Washington, D.C., Stewart scored a string of hits in the mid sixties with Chicago record label Chess, including “I Do Love You”, “Fat Boy”, and “Sitting in the Park”.  He died just shy of his 33rd birthday when his car plunged into a North Carolina river, alongside three of his bandmates.  Billy Stewart’s “Summertime”: Fruitful, fleeting talent singing the praises of a fruitful, fleeting season.