The Color of Water

Near Philadelphia, kids of color were allegedly turned away from a private club’s swimming pool (even though they’d ponied up the nearly $2000 entry fee).  Upon arrival, the kids’ presence allegedly made the regular pool crowd uncomfortable.  Now the blogosphere is abuzz.

What does that even mean?  All I know is that racists are better at acting like they’re not racist.  In public.

In defense of the Huntingdon Valley Swim Club they have posted on their website that:

“[They] had originally agreed to invite the camps to use our facility, knowing full well that the children from the camps were from multi-ethnic backgrounds. Unfortunately, [they] quickly learned that we underestimated the capacity of [their] facilities and realized that [they] could not accommodate the number of children from these camps.”

My reading is that the club underestimated how their members would react.  Underlying feelings surfaced, perhaps.  One camper was quoted by NBC’s Philadelphia affiliate as saying:

“I heard this lady, she was like, ‘Uh, what are all these black kids doing here?’ She’s like, ‘I’m scared they might do something to my child.'”  Ouch.

Ironically, 90 years ago this month, Chicago saw one of the bloodiest race riots in American History during the Red Summer of 1919.  The irony?  That riot started when a black boy allegedly floated into “white water” at what was then 26th Street Beach. Neighborhoods became battlefields.  Veterans, black and white, (newly home from World War One) made Trenches out of Boulevards.

Life and Death of the West Side 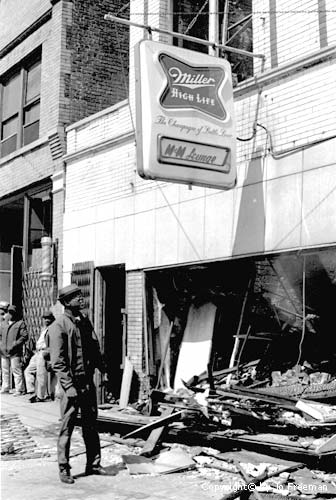 Life And Death of the West Side: a Communiversity Course

In this course, participants will create an original theatrical stage production based on the Chicago West side Riots of April 6-8, 1968 (that were in response to the assassination of Martin Luther King Jr). Participants concentrate on script writing, research, production, and set design. The project will end with a live community performance.

Facilitators: Sabrina Miller and Clarice Mills have over 20 years of collective experience in dramatic theatre and community activism.

According to Mia Henry, Communiversity events, facilitated by the Chicago Freedom School, seek to engage intergenerational audiences in the study of past movements and discussions on what we can learn from them…