Kitty & the Haywoods: a slice of Chicago Sister Funk. 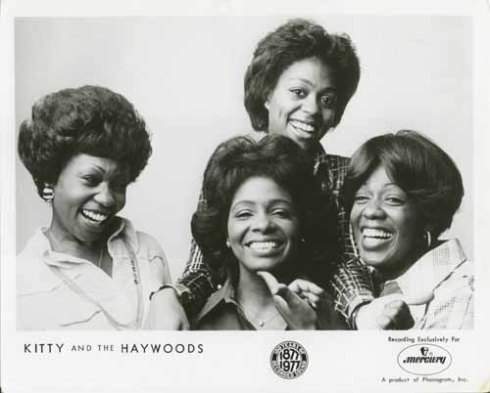 The Emotions were not the only sister group to come out of Chicago. It was all in the family for Kitty and the Haywoods, as well (although they actually consisted of three sisters and a niece). Before Kitty and the Haywoods’ self-titled debut album, Kitty had a long recording history as a background vocalist for such acts as Curtis Mayfield and Terry Callier. She was also a member of The New Rotary Connection (along with Shirley Wahls) after Minnie Riperton departed from Rotary Connection.

s recorded a single as Kitty Haywood & the Haywood Singers called “Big Black Cloud”. It was produced and arranged by Charles Stepney (who was the creative force behind Rotary Connection). Kitty had also previously released a solo record on the Weis label.

In 1976, the sisters sang back up for Aretha Franklin on the “Sparkle” soundtrack, which was written and produced by Curtis Mayfield. Before that, they recorded quite a few jingles in town.

The album Kitty and the Haywoods (1977) was produced by Mercury Records label mates The Ohio Players, and it sounds like a gumbo of the Ohio Players and Labelle at their silver-lame-wearing best.

What I appreciate most about Kitty and the Haywoods is that they were quite literally part of the backbone of the Chicago Recording scene. Too many background vocalists faded away into the shadows, remaining anonymous. But these ladies were able to shine.  Jive on!

Minnie Riperton: she was the black gold of the sun.

Minnie Riperton was, of course, so much more than her 1976 smash “Loving You”.  I won’t even attempt to jam her legacy into a blog post.  She was a mother (to SNL alum Maya Rudolph), a lover, (to Dick Rudolph) and a righteous songbird.  Riperton (pictured above, 1968 [photo courtesy jeff lockard]) and her soaring soprano were featured in the Rock-Soul outfit Rotary Connection.  Rotary Connection was the jazzy soulful dirty hippie baby of genius producer Charles Stepney and Marshall Chess (son of Chess Records founder Leonard Chess, and a visionary in his own right).

Certainly their most anthologized track is “I am the Black Gold of the Sun” (above), but each of their albums produced its crop of nuggets (my favorites are “Songs”, “Hey Love”, and “Aladdin”).  The sound was a cross-section of Rock, Gospel, Soul, and Jazz nearly as big as the City of Big Shoulders that spawned it.  Featuring Minnie Riperton on lead vocals for a number of their cuts, her other-worldly wails are the sound that almost never was.

Below, my short audio interview with Sidney Barnes of Rotary Connection (pictured far right), on how Minnie Riperton got the strength to embrace her own voice in the days when sopranos weren’t considered soulful.